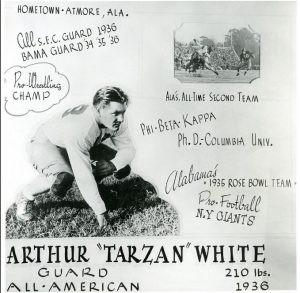 Long before athletes like Dwayne “The Rock” Johnson turned in their cleats and helmets for bright lights and tights inside the wrestling ring there was “Tarzan” White.  White, Pro Football Hall of Famer Bronko Nagurski and other robust gridiron stars were blazing trails in towns big and small across the country and throughout the world.  In total, White claimed three heavyweight titles in the professional wrestling arena.

Arthur Pershing White was born December 6, 1915 in Lockhart, Alabama.  He gathered all-state football accolades in the late 20s and then All-America honors at the Capstone as a Crimson Tide guard in 1936. He was named All-Pro with the New York Giants in 1938 and again in 1941 with the Chicago Cardinals.

Locally, Tarzan is remembered as a wrestler, mailman and teacher.  Peggy Tucker Doherty, a student of White’s, fondly remembers the only educator they were allowed to call by his first name:  “He was a very good teacher, very strict, who showed no favoritism in class.  He never talked about himself.”  Others tell of the shirtless White, regardless of the time of year, delivering mail in his Cadillac throughout the rural Jamestown community in Cherokee County. Still, others marvel at his year-round swims, training techniques, local wrestling events, amazing physique, magnificent mind or his brilliant white hair.

White was given the nickname “Tarzan” around the age of 7 for his outdoor escapades in Escambia County. White was a young adventurer hopping trains to anywhere to explore anything. A standout in high school, White advanced to the collegiate level and played his first game for the Tide at the age of 17. In 1934, White played alongside Paul “Bear” Bryant and Don Hutson while winning a national championship. Drafted by New York in 1938, Tarzan was part of a Giants squad that defeated the Packers to claim an NFL championship.  In 1941, after the bombing of Pearl Harbor, White enlisted in the U.S. Army Air Corps, earning the rank of lieutenant. Tarzan returned for one more stint in the NFL before embarking on a three-decade wrestling career, highlighted by three heavyweight crowns.

Always taking the time to give back, Tarzan became the head football coach at Gaylesville High School in 1954 before moving on to the same position at Menlo, where he captured a state championship just two years later.

The truly legendary Tarzan White passed away in January 1996.