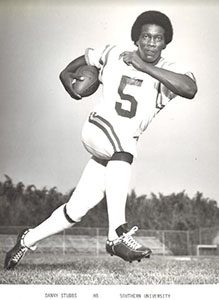 Danny Stubbs wanted to play football. He was 5-foot-8 and weighed 110 pounds soaking wet as a seventh grader when he walked on the field at Hatcher High School in 1968, but Hall of Fame Coach Eugene Weatherly saw a competitive spirit in young Danny and encouraged him to stay. Coach Weatherly was right, that desire to compete would make him successful in life and sports.

Danny grew up in the farming community of Howells Crossroads in Northeast Cherokee County with his parents and two siblings. Growing up on a farm required a lot of hard work, but Danny never shied away from it and accepted that as part of the requirement to do what he really wanted to do, play sports.

Danny attended Hatcher High School until it’s closing in 1968.  His love for competition only grew stronger as he continued to develop his skills at Centre Middle School. He entered Cherokee County High in the fall of 1970. By the end of his playing career at CCHS, the skinny kid had grown four inches and added 75 pounds of pure muscle.
His love for competition and desire to be the best rewarded him with the starting tailback position from which he broke the school single-season rushing record in 1971 with over 1284 yards. He started at guard on the varsity basketball team in his sophomore year and held that position thru his senior year. In track, his specialty were the sprints where he ran the 100 yard dash and 440-relay.

In 1973 Danny accepted a full athletic Scholarship to Southern University in Baton Rouge, La. where he displayed his versatility over the next three years playing quarterback, halfback and fullback in the Jaguars wishbone offense. Fullback was his favorite position because it fit his running style, which was described as “running angry!” Danny was Offensive Team Captain his junior year and his roommate Johnny Jackson was Defensive Team Captain. Both were from Alabama. Their roles were memorialized when Ms. Southern University presented them the game ball at the 1976 Homecoming Cotillion.

During college, Danny never forgot his commitment to the family farm, always returning during the summer to help his family. Danny is a man of faith, with a strong commitment to his church, community and being a role model for his children as well as all children he may have influenced in life. In 1977, a featured newspaper article quoted his position coach Gerald Kimble who described Danny in the following manner: “He’s an ideal young man, an All-American boy. Anything positive describes him, very sincere, intelligent and dedicated in whatever he pursues whether it’s athletics or academics. He’s what I would want my son to be like.” For Danny Stubbs, that’s description stands as the highest compliment that could be bestowed an individual!

His desire to compete has made him successful in the classroom where he was consistently in the top 10 percent of his classes. In business, he has successfully managed sales and administrative staff across America, Canada, Puerto Rico and the Maquiladora States in Mexico. In community and civic affairs, Danny has supported public education as a Board Member of the Spring Valley Education Foundation since 1984. Steadfast and defiant in his passion for the game of golf as in life, Danny accepted a position with the South Carolina Golf Association as a member of the Board of Directors in 2016.