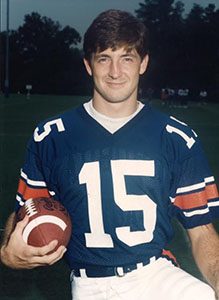 As a varsity forward on the Warriors basketball team Marc would post a scoring average of 15 points per game his senior season and lead the squad in rebounding. In track, his 10.69 100-meter and 21.9 200-meter times served as personal best. It was on the gridiron that Marc excelled, becoming one of the most coveted prospects in the state. Johnson was a gem, combining his 4.45 40-yard dash times with a superior skill set that served the Warriors offensive and defensive schemes. In his storied career, Marc was the double-double threat, hauling in 23 touchdown passes while intercepting the opposition the same amount (23) of times. On special teams, Marc was also a quick-strike threat, returning four punts for scores. As a Top 10 prospect, Marc was selected to represent the Alabama All-Stars in the annual grudge match with Mississippi as a receiver. Due to injury circumstances, Johnson was asked to forego his offensive role and start on defense. From his free safety spot, Marc had two interceptions in leading the Bama squad over their cross-state rivals 24-20 in four overtimes.

Marc accepted a full scholarship offer to Auburn, where he played for head coaches Pat Dye and Tommy Bowden. Always a team player, Marc started at wide receiver and defensive back. He quickly worked his way onto the field making 20+ tackles on special teams and snagging four receptions for the Tiger offense. After lettering his sophomore year, Johnson joined the defensive secondary, averaging 30 plays a game and collecting a season total of 30+ tackles and 10 pass breakups. His senior year, 1993, was particularly memorable as Auburn finished 11-0. Johnson’s interception versus Georgia in the Tigers’ 10th game was pivotal in the streak. A 22-14 Iron Bowl victory a week later capped the splendid season.

A leader in the classroom as well as on the field, Johnson graduated from Auburn in December 1993 with his Bachelor’s Degree in Business. Johnson’s business endeavors and civic involvement continue to this day. In 2012, Johnson ran and was elected to the Centre City Council.