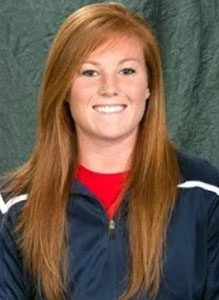 Kaitlyn Storm Griffith Revette began her extraordinary varsity softball career at Cherokee County High School in the seventh grade as the starting shortstop.  She joined the varsity basketball and volleyball teams the following year.  Kaitlyn earned All-County MVP honors as well as All-State accolades in all three sports, but it was on the diamond where Revette shined brightest.

Kaitlyn’s father Tim imparted a skill set Revette originally incorporated while playing baseball.  The transition to softball was an easy one for the gifted athlete. She earned her first of six varsity softball letters playing for head coach Travis Barnes.  Revette’s career was a continuous highlight reel. A batting average of .521 with 391 hits, 309 RBIs, 315 runs, 95 stolen bases and 72 home runs. At the time of her departure, Revette was number two in all-time home runs in Alabama High School Athletic Association (AHSAA) softball history. Along the way, Kaitlyn and her teammates would amass hardware that reflected six county championships, five area titles, three regional trophies and red map as state runner-up in 2011. Revette’s prestigious career at CCHS was culminated with the retiring of her #12 jersey.

A full scholarship awaited Revette at the University of South Alabama. As an All-America scholar-athlete, head coach Becky Clark was glowing in her remarks regarding Revette’s senior group which captured three Sun-Belt Conference championships and made four NCAA regional finals appearances. Revette’s 13 home runs set a new single season benchmark for the Lady Jaguars while tying for the career best of 28. Revette’s tenure at USA also included school records for hit by pitch (56) and sacrifice flies (12).  Kaitlyn owns the second highest slugging percentage (.597) of any Lady Jaguar and her six RBIs versus Ball State ties the standard.  In 2015, Revette was chosen as the Sun Belt Conference Most Outstanding Player.

An All-America Scholar-Athlete, Revette was inducted into the “Mortar Board”, a premier national honor society honoring women for superior achievement in scholarship, leadership and service.  Revette setbacks in her athletic career due to injury were only momentary lapses and guided her into her current profession.  Now a physical therapist, Kaitlyn has the unique ability, opportunity and platform to heal and inspire.  A consummate team player and an exceptional student athlete.  A coach’s dream.  Kaitlyn connected with parents, fans and students in an approachable manner that endeared her to Warrior and Jaguar fans forever.