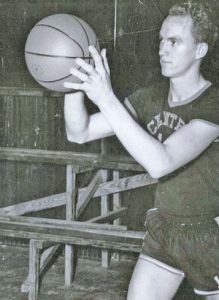 Charley Whorton grew up in a family of twelve children, where work came first and not much else followed. There were always chores to be done on the Whorton farm. Life was difficult and recreation was rare. As the angular teenager grew up, Whorton discovered the sport of basketball. He fell in love with the game, and his passion to play would forever endear him to his Warrior teammates, coaches, and fans.

Few knew that getting to practices or games was an everyday test of character for Whorton and one of his teammates.  It was a three-plus mile hike thru a cotton patch just to reach the highway. The pair then hoped someone would pick them up while they hitchhiked the other seven or eight miles. Once the training or contest was done, the duo had to retrace their steps.

Whorton grew to be 6’3″ and “farm tough.” No one dared to tangle with him close to the bucket. A force on the offensive and defensive boards, Whorton was relentless in his pursuit of errant shots. Offensively, Charley had a “fade away” shot that proved to be undefendable. Using the fade and his ability to sink long range bombs from the corners, Whorton set a Warrior record of 42 points in a single game vs. Gaston. Whorton also established the single season benchmark at Cherokee County with 513 points while averaging 28.5 points per game.

Whorton was a team man first and foremost. While most valuable player accolades often found him, Whorton’s teammates attest that his selfless spirit is what made their squad superior.

Whorton was offered a scholarship to play collegiate basketball but circumstances did not allow that dream to materialize. Fabled Coach T.A.Windham stated “Charley was the first player that he ever coached who could play professional basketball.”

Faith and family have consumed Whorton’s life in the 60 years since his days on the hardcourt. The journey has been filled with numerous blessings and rewards. His trek to play the game of basketball started on a trail through a cotton patch, and it set him on a path that led to the Hall of Fame.