Jamie Hampton had all the tools scouts covet – size, speed, strength and smarts. In the summer of 2005, Hampton made the decision to accept a Division I scholarship with Purdue to play football, but he would never make it to West Lafayette. Instead, Hampton de-committed from Purdue and accepted a scholarship offer from Troy University.

While many didn’t understand the reason why he made that switch, no one foresaw the life changing impact his decision carried.

The tigers finished his junior season 12-1 when Jonathan McWhorter; Hampton’s first cousin, took over for Smith. Under the direction of the new mentor, the Tigers rolled to a 13-2 record and Class 1A runner-up finish.

Hampton headed to Troy and a promising future as a Division I quarterback. He gained the Trojans quarterback starting position, but would battle injuries throughout his entire career at Troy. Knocked down, but never out, he continued to fight back each year to return to action. The former Tiger played 24 games over his five-year career at Troy, throwing for 12 touchdowns and nearly 1,200 yards.

While he became a genuine example of perseverance on the field for the Trojans, it was his off the field transformation that truly affected others. The physical trials he endured led to a teammate challenging Hampton’s spiritual testimony. He realized that football provided a platform for God to use to him in a powerful manner. Former Troy head coach Larry Blakeney often praised Hampton as he witnessed firsthand the transformation of the “exceptional Christian young man.”

Athletically, Hampton had one last goal to achieve prior to closing his career. While still in rehab, he removed the protective boot from his injured foot and proceeded to clock a 4.47 40-yard dash. Through all the physical trials Hampton endured, he was still the complete package… size, speed, strength and smarts. Thanks to a challenge from a friend, the package now includes an enduring faith and an everlasting spirit. 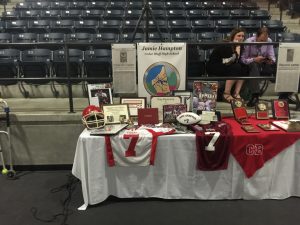