On the field, Moten ran his routes with military precision. His reliability allowed quarterback Cole Peace to lock onto his primary target and unload missiles into Moten s sure hands time and again. The combination proved to be exceptional as Moten eclipsed the Alabama high school record for career receiving yardage on Nov. 1, 2002. In total, he established a new benchmark of 4,272 receiving yards.

Moten would close out his Tiger years in brilliant fashion with top five career marks in receptions, touchdowns, single game touchdowns and numerous other AHSAA bests. His offensive exploits were so pronounced that many forget Moten also recorded 109 tackles (eight for losses), four interceptions and caused three fumbles during his senior campaign. His efforts earned the sure-handed wideout first-team all-state accolades in 2001 and 2002.

Moten’s career reached its pinnacle when he was selected as the Class 1A Back of the Year and awarded a slot on the Alabama Sports Writers Association Super 12 squad. His final high school gridiron appearance came in 2003 during the annual Alabama-Mississippi All Star game, playing alongside Jamarcus Russell and Tyrone Prothro. Moten went out a winner as the Alabama squad prevailed 24-16.

A leader on the field and in the classroom at Cedar Bluff, Moten carried a 3.5 GPA. He garnered a coveted athletic scholarship to Jacksonville State University where he would become a three-year starter for the Gamecocks and claim two Ohio Valley Conference championships.

From his days as a team manager for the Tigers until his final game at JSU, Moten placed team above self.  Not the biggest in size or stature, he was elevated among his teammates because of his loyalty, dependability and reliability. A model of consistency, Moten still ranks among the best at wide receiver in the archives of Alabama high school football history.

As a young man, Moten made the choice to become a part of the Cedar Bluff family. Tiger fans will long remember the most prolific receiver in AHSAA history for his competitive spirit, commitment, selflessness and his desire to bring recognition to his school and community through his unfaltering consistency. 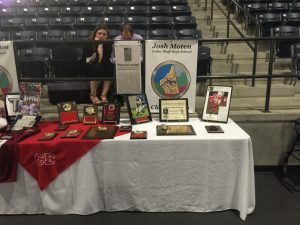