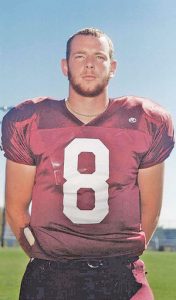 “Cool Hand Luke” was the moniker former Cherokee County Herald sports editor Scott Earp used in reference to Sand Rock quarterback Lucas McMichen. The strong-armed signal caller was the middle son of three exceptional quarterbacks born to Danny and Diane McMichen. Jeremiah, the oldest, set the standard for Luke on work ethic and “always staying calm and
focused” while guiding the Wildcats to a 12-1 record and state semi-final finish in 1996.

Under the guidance of renowned coach Russell “Rusty” Jacoway, Lucas stepped into the starting role as a 1Oth grader in 1997. The baptism by fire didn’t faze the 6’3″, 225-pound McMichen. The sophomore simply led the squad to an 8-1 regular season record. In the third round of the playoffs, McMichen calm demeanor and steady performance aided the Wildcats in their 22-
point come-from-behind victory at South Lamar A week later he delivered another clutch performance against Springville, thrusting the Wildcats into the state championship against Luverne. At historic Legion Field, Sand Rock finished as the 2A runner-up to the Tigers. The Wildcats would reach the second and third round of the playoffs respectively in the next two seasons.

With Lucas under center, the Wildcat troops never lost an area game. They compiled an overall regular season record of 25-5 and a post season mark of 7-3. In total, McMichen would complete 435 of his 754 passes for 6,183 yards and a remarkable 65 touchdowns. Earp had colorfully described McMichen precision passing as “the accuracy that could trim the hair off a fly’s back from 40 yards away.”

McMichen garnered All-State honorable mention accolades as a sophomore and first-team honors during his junior and senior campaigns. He also was an all-county and all-region selection in football and basketball for three years.  A gifted baseball player, McMichen was a first-team pick in 1999. A leader on the field and in the classroom, Lucas carried a 3.7 GPA and was chosen academic all-state in 1998.

After recovering from a serious car accident in the spring of his senior year, McMichen became a four year letterman and three year starter at West Georgia University. During his career with the Wolves, he would be selected player-of-the-week four times while throwing for over 4,000 career yards.

Lucas McMichen’s calm exterior often misled his coaches and teammates while serving as a weapon that deceived their opponents. Beneath his steely facade was a humble, hard-working, field general who knew his troops needed a cool hand in the heat of battle.