Paige Anderson was just a small- town girl driven to achieve perfection in every aspect of her life.  Anderson wanted nothing more than to turn the spotlight that so often singled her out back onto close-knit community she cherished.  Every point, every win, and every title was a chance to represent Spring Garden. The accolades are almost countless. From a youthful one-on-one encounter with NBA superstar Shaquille O’Neal to a game-winning 3-pointer that led to Samford’s first-ever NCAA women basketball appearance, Anderson’s achievements are unparalleled.

Throughout her career, Anderson collected numerous all-county, all-area and all-state accolades.  Four times she was a Class 1A Basketball Player of the Year finalist and twice (2006 and 2008) claimed the top honor.

With Anderson controlling the point, the Lady Panthers’ basketball legacy grew with three Class 1A State Championships in 2004, 2005, and 2008.  Anderson would close out her high school career as the all-time Cherokee County leader in points scored with 3,667. Her stat line also includes 1,137 rebounds, 573 assists and 484 steals.

In 2008, Anderson the perfectionist, gave a gift to the community she treasured, as the Garden Girls delivered a state basketball championship wrapped with an unblemished 36-0 bow – a flawless finale fitting for Anderson’s brilliant  career. 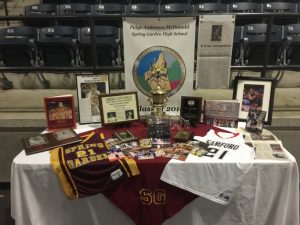