“Roll, Rock, Roll!” That’s the familiar chant heard echoing from atop the mountain when the Sand Rock faithful rise in unified support of their beloved Wildcats. That mantra was heard often as Taylor Burt produced over half a decade of varsity thrills in basketball, softball and volleyball. While Burt excelled in three sports, her “all in” attitude at Sand Rock also included cheerleading duties in her limited spare time.

Coach Lisa Bates noted that “at just 5’6″ on her tallest day and not necessarily the fastest athlete, Burt made up for those ‘shortcomings’ with incredible instincts, an inextinguishable fire and a relentless intensity.” Burt grew up in an ultra-competitive family with parents Brad and Lisa, and younger brother Brannon. The trio provided ample opportunities for Taylor to hone her passion for winning and foster an instinctive ability to lead by example.

Taylor Burt was the complete package. A deadly sharpshooter in basketball and a fearless middle hitter in volleyball. On the diamond, Burt was simply clutch at the plate or in the circle. A consummate team player, she is beloved by her fans, coaches and teammates. 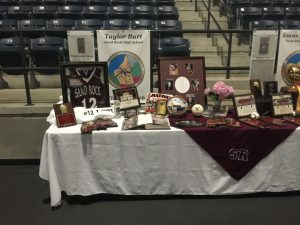