CENTRE – On Saturday evening, the Cherokee County Sports Hall of Fame inducted its Class of 2016 at the Gadsden State-Cherokee Arena in front of a packed arena floor, giving all seven new members and their families a night they’ll always remember.

The event has certainly grown since it began in 2005.

One of the things Hall of Fame President Mike Welsh said the organization is most proud of is the unveiling of the plaque room in the arena lobby. Anyone can now read about all 51 local legends who have been bestowed the Hall of Fame honor. It’s something Welsh said has been in the works for some time.

“We’re excited about the display of our Hall of Fame plaques up there in the arena lobby,” Welsh said. “It’s a small place, but it’s a good place. It looks really neat. That’s thanks to Joy Perry, Thereasa Hulgan and the Chamber (of Commerce) working with Gadsden State and offering that to us. It looked like everybody was enjoying that really well.”

In addition to reading about Hall of Fame classes past, those in attendance Saturday were treated to video montages from the Class of 2016 and their presenters – something else that was a new feature added this year.

The video montages were created by WEAC-TV 24 personality Gerhard Mathangani and were presented following emcee Jon Holder’s comments on each honoree.

“So many people put in so much work to make this happen. It really went well,” Welsh said. “I hope it was special for these new inductees. I think it was a good experience for everybody in attendance.”

People interested in learning more about Saturday’s ceremony, as well as other Cherokee County Sports Hall of Fame classes, can go to the organization’s new website, www.cherokeecountyalabamasportshof.com.

“It’s another way to honor the inductees from every class, with the pictures and bios,” Welsh said. “It’s a lot of teamwork, but maybe that teamwork has contributed to making tonight seem like such a big night.”

Welsh encourages anyone to nominate deserving members for the next Hall of Fame class, to be inducted in 2018. Nomination forms and a list of criteria can be found at the organization’s new website.

The following is a list of accomplishments made by each member of the Class of 2016. You can read more in-depth stories on each honoree at 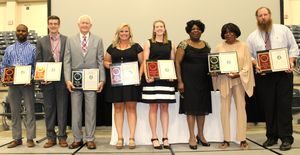 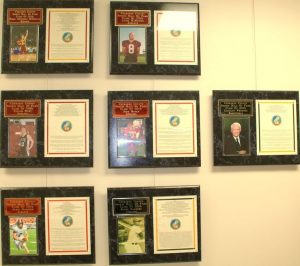 Part of the Cherokee County Sports Hall of Fame festivities on Saturday evening at the Gadsden State-Cherokee Arena included the unveiling of a plaque room in the lobby, which includes the Class of 2016. Photo by Shannon Fagan.